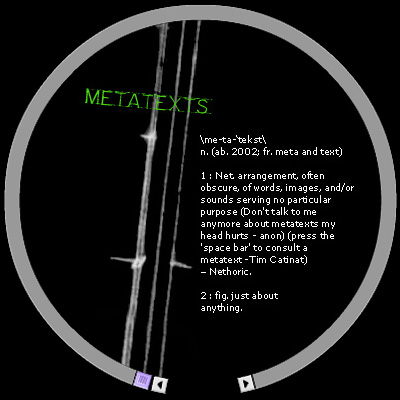 Metatexts [2004-2020] was an interactive poetry website experimentating a mix of texts, code, sounds, images and animations. Intuition and meaning are to be questioned within an intimate atmosphere developed at the user's pace. Navigation from a metatext to another was to be made via the press of the keyboard's space bar. Ways of navigating inside a metatext depended on the feature and intuition. Features were randomly picked among an unknown selection from the artist.
Metatexts was first published in French [Métatextes.com] on the web in 2002, noticed by the French national press [Le Monde Littéraire, Libération, Télérama] and participated to many off-lines exhibitions in France.
Its international version Metatexts saw the light of the day in 2004 [thanks again to the late Martha Mast for her invaluable help with regards to its translation].

2021 note : initially built on the Flash technology which has been abandonned by Adobe in late 2020, only former configurations could enjoy a real immersion into this project [pressing keyboard's space bar, using random features, etc]. As I type this, sadly, HTML5 & CCS3 are far from being able to match what Flash could achieve - video seems to have killed curiosity and interactivity may just have had its golden age, but human adventure should resurface somewhere else.

Youtube shortclips [mostly in French] can be viewed as 'video memories', but the whole project's interest strongly relied on the interactive and random experience.